– In France, the FNSEA, Adivalor, and plasticulture were very present in the preparation of the law « Fight against waste and the circular economy ». This mobilization made it possible to raise awareness among public authorities and parliamentarians on the merits of the French device for managing the end of life of plastics. Our model was recognized and preserved in the law published in the official journal on February 11.

– The biodegradable film is once again accepted in agriculture in France, following the validation of the CNAB in January 2020. The INAO reading guide has been updated to this effect. https://www.inao.gouv.fr/content/download/1352/13877/version/18/file/GUIDE-de-LECTURE-RCE-BIO%202020-01.pdf

– In Spain, the MAPLA association (Medio Ambiente, Plásticos Agricultura) was created to provide financial management for used agricultural plastics. Over 80% of the market has decided to join the new scheme. José-Maria Bermejo, project manager, will ensure the implementation of the system from April 2020. However, it will be necessary to wait until 2021 for the first collection operations to be carried out.

– In the United Kingdom, also 80% of the market has decided to join APE UK for the establishment of a national scheme for the collection of used plastics. Carlo Banchero, project manager, was able to establish a large network in favor of the implementation of the system which aims to provide lasting solutions to farmers for the management of the end of life of their plastics. Public authorities in Northern Ireland, Scotland, Wales and England have shown great interest in the industry’s initiative. A large number of distributors, and among the most important, are also declared favorable. Finally, very positive contacts have been established with collection companies and recyclers in order to develop a local system for all farmers. APE Europe and Carlo are now working on the operational modalities which will be presented to the next management committee. As in Spain, the first operations are planned for 2021.

– In Europe, DG Env. of the European Commission has commissioned a study to analyse the situation of conventional agricultural plastics and biodegradable products. After a first meeting, the APE Europe welcomes this study, which will help identify solutions so that the 22 million farmers can benefit from a sustainable device for managing end-of-life plastics. The EPA recommends that all new legislation protect and develop the European model of NCS which brings together farmers, distributors and processors in governance. Indeed, this sector solidarity is a pledge of technical and economic efficiency as shown by the results of existing schemes which operate according to this model.

– It is in this context that the APE Europe and the French Committee of Plastics in Agriculture signed the declaration of the Circular Plastics Alliance (CPA). Established by the DG Grow of the European Commission, the CPA’s mission is to encourage industry to integrate 10 M Tons of regenerated granules from post-consumption (PCr). Bernard Le Moine leads the agricultural working group, itself composed of several workshops: Eco-design, Collection & sorting, R&D, Integration of recycled and Monitoring. A large number of members of the CPA and the EPA are committed to the process, by signing the declaration. The CPA is a means for the APE to sensitize European authorities on the specificity of the agricultural model in its management of end-of-life plastics.

– Coming soon: the European Plasticulture Strategy is under preparation to inform and explain how important the plasticulture is and how plasticultors are involved in the circular economy on collective initiatives.

APE Europe thanks all these members collectively engaged in the national collection schemes and in the CPA. They thus meet the requirements of modern, environmentally responsible agriculture. The APE invites companies that have not committed to do so without delay in order to act in perfect coherence with their own individual or collective environmental commitments for those who are already involved in the schemes in France, Germany, Ireland, Sweden , Iceland, Norway and support public collections in Belgium and Luxembourg. 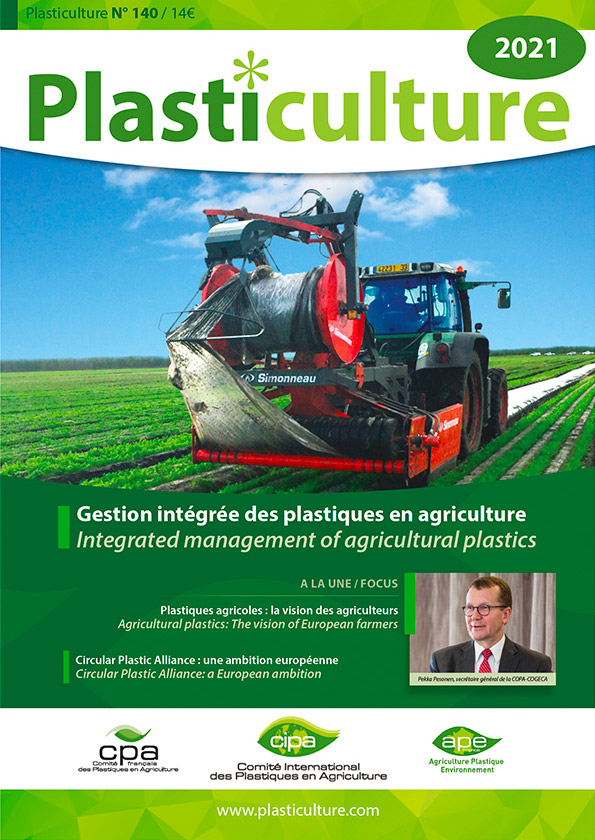